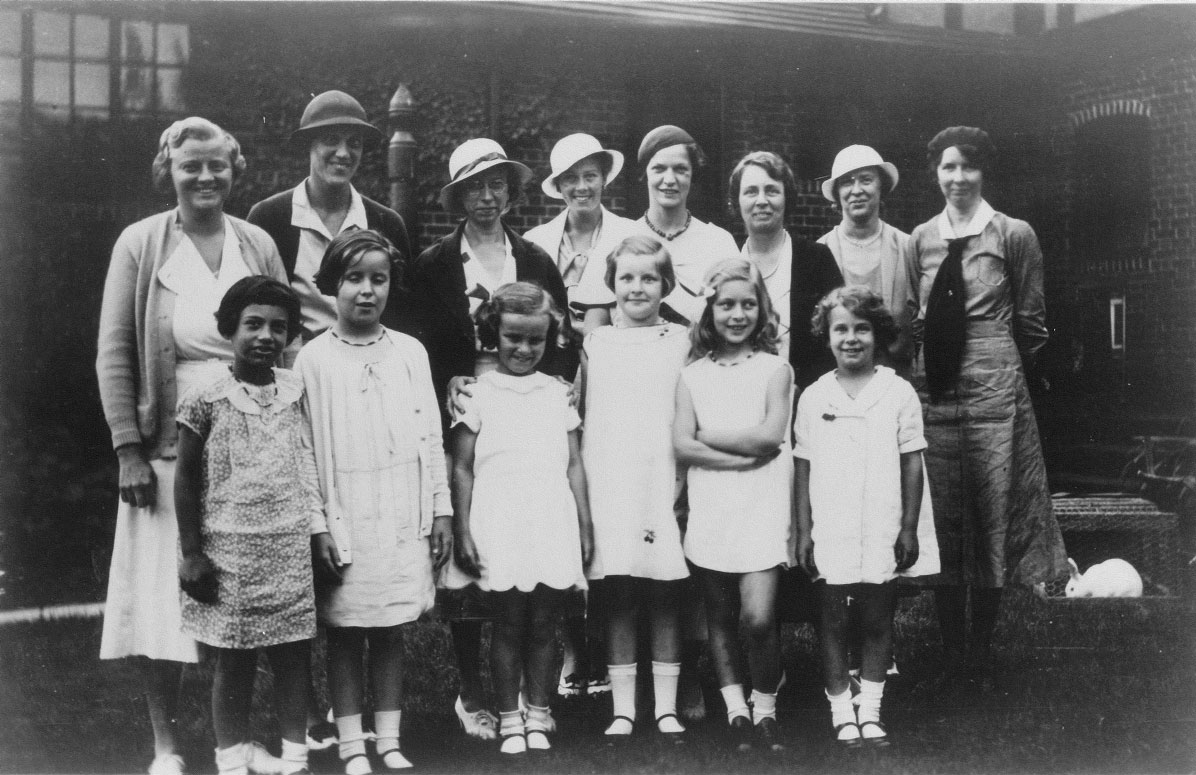 The Apple Tree Song sung by generations of The Elisabeth Morrow School students shares the story of how students develop strong roots while at EMS and then grow in unique and beautiful directions when they leave. But the apple tree can also be a symbolic timeline of the school’s history over the past 90 years.

The school’s namesake, Elisabeth Morrow, could be considered the seed that grew into a fledgling tree. Over nine decades, the tree has grown taller and wider, nurtured by school administrators and teachers. The proverbial fruits of their labor are generations of EMS students.

The concentric growth circles inside the apple tree’s trunk each represent one school year. The first was in 1929, when three mothers created The Children’s Home School for their preschoolers in a home that is now Graham House on the Dwight-Englewood campus. In 1930, Elisabeth Morrow, a young teacher from Englewood, took over the fledgling preschool, moved it to a rented Dutch farmhouse, and renamed it The Little School. Students from 18 months to 5 years old were greeted at the door each morning with a handshake, which became a long-standing EMS tradition.

“It seems history really does repeat itself,” says EMS kindergarten teacher Lori Lowell. “In the 1930s, students would be greeted with a handshake and then sent to the nurse to have their temperature taken. It was the time of the polio epidemic. Once again (in 2020), children have temperature screenings, as we await the discovery of a vaccination for COVID-19. Unfortunately, it seems that the 90-year-long tradition of a handshake greeting is likely to end.”

Two years later, Elisabeth Morrow told the Parents Association that she was to be married and would be moving to Wales. She appointed her dear friend Connie Chilton to run the school and remained active with managing and financing. But by 1934, The Little School faced large deficits. Elisabeth and her mother, Elizabeth Cutter Morrow, provided funds for rent, heat, and repairs. Tragedy struck that fall when Elisabeth died suddenly. In her memory, her family and friends formed a non-profit group to keep the school open. In 1937, a larger building was erected on Lydecker Street to hold the growing number of students.

During World War II, the school offered an extended day program and full-day summer camp to help working mothers. In 1947, preschool programs ended and enrollment began at age 4, extending into higher grades. To make the school more relevant, the name was changed from The Little School to The Elisabeth Morrow School in memory of its founder.

“I have seen many changes take place. Thoughtful changes, always made with respect for the ‘core of the apple,’ what is best for our students,” says Lowell, who has been a teacher at The Elisabeth Morrow School for the past 25 years. “Elisabeth Morrow’s philosophy of trusting in the best of both old and new has brought about changes that have kept EMS respected in the independent school community.”

After the war, many mothers returned to full-time homemaking and became more involved in school life and fundraising during the 1950s. In 1955, the school suffered a significant loss with the death of Elizabeth Cutter Morrow, its chief benefactor. Parents, friends, and staff purchased her home on Next Day Hill and its four acres to accommodate more grades and double the size of the campus. The home was renamed Morrow House in Elizabeth’s memory.

By the 1960s, Chilton was a confident and mature leader of EMS, which became less dependent on the Morrow family. EMS was part of a Three School Development Council and Foundation with the Dwight School and the Englewood School for Boys. They developed a plan in which preschool and elementary grades would be taught at EMS, while Dwight and ESB took over middle and high school. The Three School Foundation provided funds to build a new open-sided Gymkhana at EMS in 1966.

EMS changed with the times in the 1970s. Emulating older siblings, EMS students challenged the dress code, especially the length of boys’ hair and sideburns. The school made some concessions but still maintained tradition with firmness and humor.

“When I began teaching at EMS, there was a more formal feel. For example, many families enrolled their children in an (off campus) after-school class that taught conventions of social etiquette, white gloves required,” Lowell says. “Our dress code required girls to wear skirts or dresses, and boys to wear a shirt, tie, and blazer. Sneakers were only permitted for physical education and outdoor play. (Of course, there were many untucked shirts and misplaced ties by the end of the school day!) Over time, conventions of wardrobe seemed less important as EMS became more mindful of the value of expressions of individuality.”

Also in the ’70s, younger girls were transferred from Dwight to EMS, and with many United Nations diplomats and attaches moving into the area, EMS welcomed a more diverse student population. A business administrator was hired for all non-academic affairs. A new preschool building was constructed for nursery and kindergarten students and named the Chilton House, and the Gymkhana became a permanent structure with walls and heating. “Many alums who are older than me remember the open sides. Apparently, it was pretty chilly in the winter,” says Adrienne Anderson, an EMS alum and former trustee whose children also attended the school.

In 1980, Connie Chilton retired after 50 years of leadership. Successive Heads of School helped bring positive changes to EMS, especially with its accreditation by the Middle States Association. Computers entered the classrooms, and an extended day program returned in the late 1980s as more families had two working parents. A full-time learning specialist helped children with different learning styles.

Tricia Eickelberg, former Director of Early Childhood Program and Chilton House librarian, notes that when she started at EMS in 1984, “Technology was just making an entrance into schools. EMS jumped quickly on that bandwagon and rightly so. This leads me to one of the things that continually impresses me about the school, that being the way the leadership and educators at EMS continually look to the future, always wanting to be at the forefront of what students need, not just immediately, but down the road.”

The economic boom in the 1990s brought several expansions, including new science wings in Morrow House and Little School, some new classrooms, upgraded computer facilities, and a new gymnasium/performing arts center for Little School and Chilton House. The first International Food Festival was held in 1996 and continues biennially. With thousands of graduates, EMS began formal class reunions in 1995.

“These are just a few of the significant changes I’ve witnessed during my 20 years working at EMS,” Eickelberg says. “So perhaps that’s another thing that makes EMS incredibly special. Once you are a part of it, it remains a part of you. That connection is so strong. Being a part of the EMS family is such a gift, something I will continue to treasure as EMS moves closer to being a century old.”

Heading Into a New Century

In the 2000s, parents led a new capital campaign for a middle school, and growth was visible not only in physical changes on campus but also in a larger student population. The first seventh-grade class started in September 2004, along with a new Dean of Students and related renovations throughout campus. Compassion became the fourth “C” at EMS, joining courtesy, consideration, and cooperation.

Today, EMS teaches almost 400 students from age 2 through eighth grade. Chilton House is for students age 2 through kindergarten; Little School is for first to fourth graders; and Morrow House is for fifth through eighth-grade students. The 14-acre campus has six buildings, with technology labs, gymnasiums, science labs, and libraries, as well as an athletic field, nature trails, working gardens, and playgrounds. Students hail from more than 50 towns in New Jersey and New York.

“Forward-thinking — a term I am sure Elisabeth Morrow and Connie Chilton did not use — was and is one of the many strong characteristics of the educational program that has served so many for so long,” Eickelberg says. “The founders of this magical school were truly forward thinkers in their time.”

There's No Better Time to Support Your Child's Education

Every time you donate to one of Elisabeth Morrow's dedicated funds, you help enrich the daily experiences of our community on campus. STEAM spaces are improved, library catalogues expanded, scholarships are funded, and teachers are hired. Every day, you can see the impact your generous donations have on campus.