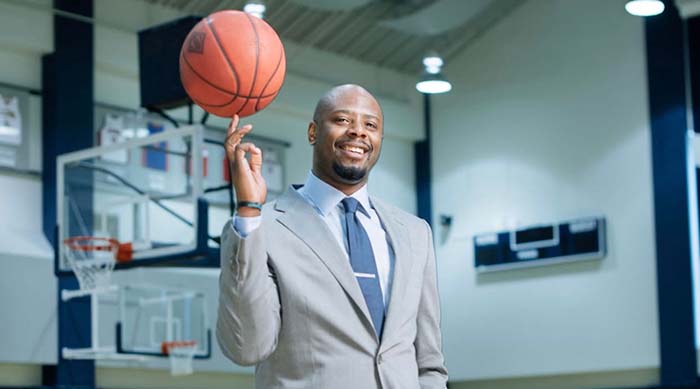 While Patrick Ewing Jr. ’96 has many fond memories of his time at The Elisabeth Morrow School, there is one moment in particular that you could say is stuck in the “web” of his recollection.

“I believe it was my sixth-grade year, we were auditioning for the play Charlotte’s Web,” recalls Ewing. “I auditioned to be Templeton the rat, but I ended up being a bat, which I wasn’t happy about,” he says chuckling. “I’m a great actor, still to this day, so if you want to go back, I will go back and play Templeton…I will come do it!”

Not being cast in the role of Templeton turned out to be the perfect assist for Ewing’s start in his basketball career. While he remembers the laughs he received for his one line as “Bat No. 2,” during the show’s first performance, he says a basketball game conflicted with the second night of the show and he decided to go to his game instead of performing.

“So basically, my career path was made at EMS: I was either going to be a basketball player or an actor. And because I didn’t get the role I wanted, I went to basketball,” he says jokingly. “Probably the right decision.”

FOR THE LOVE OF THE GAME

Taking a look at his impressive resume, one would say it was indeed the right decision. After playing basketball throughout high school and college, Ewing was drafted to play professionally all over the country, and wore jerseys for the Sacramento Kings, Houston Rockets, New York Knicks, Orlando Magic, and New Orleans Hornets (now the Pelicans). His career also took him overseas as he played in Greece, Germany, Spain, and Qatar.

Ewing says that he knew he wanted to be a professional athlete since the day he was born and attributes his interest in the business to growing up and experiencing the success of his father, basketball legend, Patrick Ewing Sr.

“Most kids grow up and they see what their parents do for work, and it just so happened that my dad was a professional athlete, so I wanted to be like my dad and be a professional athlete,” he says. “He was the dad that brought me to his workouts and games. I was with him everywhere he pretty much went; I was at the Olympics, all-star games… that’s what I knew as a kid. It was a normal day for me to see all of these NBA stars.”

In addition to his father, Ewing looked up to other well-known athletes, such as Dion Sanders, Wayne Gretzky, Mark Messier, and Derek Jeter. Being able to meet professional athletes in the industry and talk to them about their careers was a unique experience and one that he never took for granted.

While his dad gets the credit for being the professional athlete that inspired him to pursue his career, Ewing says his mom was a tremendous mentor.

“My mom was the one who was traveling with me to games, pushing me to work out. A lot of people would have thought it was my dad who was pushing me to do that, but it wasn’t at all. He was more laid back and was like, ‘Why don’t you be a doctor or a lawyer?’. But my mom was like, ‘You have a talent, so we are going to make the most of this.’”

The teachers and support system Ewing had at EMS also contributed to his success on and off the court, having prepared him for his journey through high school and beyond. He says that showing others compassion and courtesy are two things he took with him from his time at EMS and have carried with him for life.

“Having compassion for others that have situations that may not be similar to mine…and just having the common courtesy to treat everyone the same. I think those are two of the most important values you can have in life and something that actually got me to where I am today.”

Ewing also holds tremendous gratitude for the academic guidance he received from his teachers at EMS and credits the school with being the first place where they engaged his abilities to learn. His teachers created a tailored learning environment for him. For example, for many of his tests, they allowed him to vocalize his answers instead of writing them down.

“I couldn’t really express myself in my writing as well as I could express myself in words,” shares Ewing. “EMS was the first place where I was really able to excel academically to my capabilities. I was an OK student before, but it was the first place where they were able to really understand how I learned and show me the right ways to be able to express myself. I was very knowledgeable; I just had to go about learning in a certain way. I think that they were the first people to really show me how to do that. I will forever be grateful for that because if it weren’t for them, I don’t know if I would have been as successful academically as I was.”

In addition to appreciating the academics at EMS, specifically his math classes, he enjoyed traditions and activities at school. From bringing his stepmom to square dance in the gym, to Field Day (for the record, he is a proud member of the Green Team), to playing the drums and viola.

Today, Ewing takes the lessons he learned at EMS and applies them as a coach at his alma mater Georgetown, where he has coached basketball for the last six years, and works in alumni relations for the athletics department. Georgetown is also the place where he met “the best thing that ever happened to me”: his wife, Katie.

They have been married for nine years and have four children. This summer, Ewing is taking his EMS memories and expertise to Canada, where he will serve with the Canadian Elite Basketball League.